Tramontana is a fascinating bikepacking adventure. The film is one-half expedition and one-half introspective dreamscape. So feel the cold darkness, hear the crackling of the fire and breathe the thin air of the lonely wilderness… 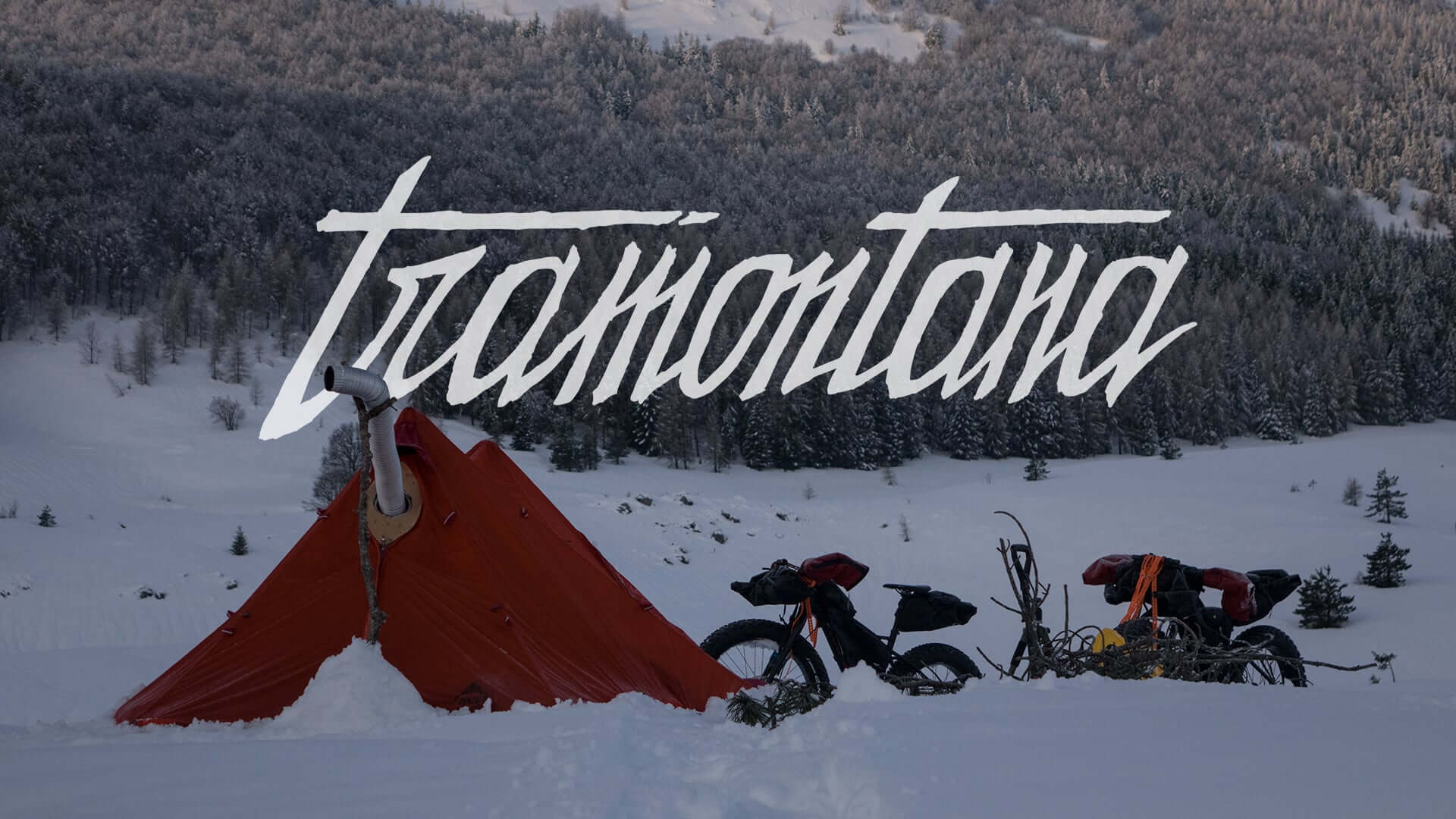 Tramontana is Montanus' new short film, a year-round bikepacking project, launched by the two bike-crazy adventurers Francesco and Giorgio from Abruzzo in Italy. The two Italians were virtually the main actor and cameraman in personal union, since they had to film without a crew. For example, they turned a conventional espresso machine into a portable wood-burning stove that made survival possible in this rugged wilderness.

Tramontana [tramonˈtaːna] is a cold and dry wind that blows from north Europe towards Italy carrying snow and frigid temperatures. In ancient times the Latin word trānsmontānus (trāns- + montānus) indicated what was beyond the mountains, unknown, barbaric and dangerous. Spending the night outdoors alone amidst wilderness is perhaps the most fascinating aspect of bikepacking. But at times, this experience can also be quite traumatic. Sleeping within house walls generates a sense of security that can vanish when replaced by the thin fabrics of a tent and sleeping bag.

Tramontana is half dream and half expedition. It’s an introspective journey through the pathways of ancestral fears: dark, cold, isolation in open spaces, and wild beasts. Tramontana is also a tribute to Fire, the natural element with whom man has used to quell these fears. Fire is light beyond the sunset, heat in the middle of the cold. Fire is fellowship. Fire is ember for food and safety from wild animals. The harshness of winter wakes the wild side from forced hibernation between the depths of the ego, where it’s written the history of mankind since the dawn of time. Traveling through the “transmontanus” reveals who we are and where we come from. 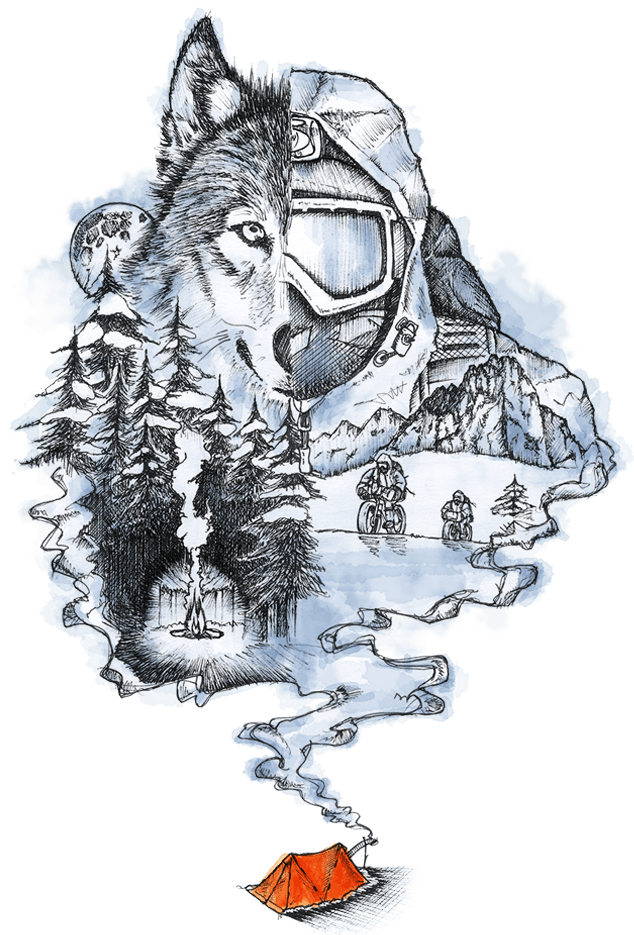 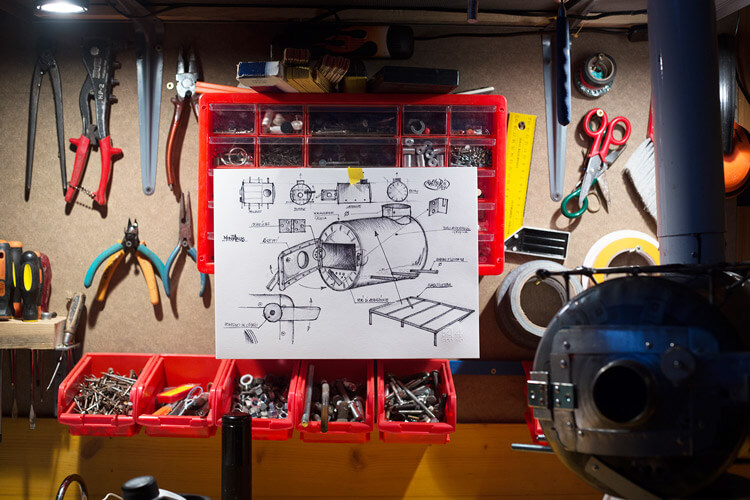 To film in midwinter – and in complete self-sufficiency — Francesco and Georgio decided to set up a basecamp to store food and equipment, and to use as shelter during snowstorms. It was also crucial for warming up and drying clothes. The best solution was to maintain a warm tent heated by a wood stove. To prepare this basecamp, everything had to be tough. And it had to be light and compact enough to be carried on bikes. They chose an MSR Twin Sisters shelter. It’s not a true tent as it is floorless. It is, however, a four-season tarp-shelter with two doors, two vents, and a snow skirt. 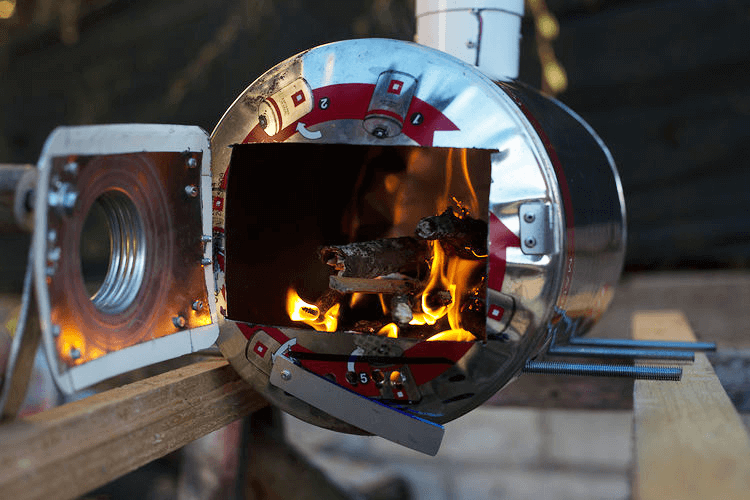 Their handmade wood stove was built from a 5L metal tank reclaimed from a commercial espresso machine. Using an angle grinder they cut a rectangular opening in the frontal area. That was then repurposed as the door to load wood into the stove’s chamber. The ventilation is provided by a central hole in the door — see 06:35 in the film — as well as four holes in the lower front of the stove. A rivet-hinged piece of aluminium slides to cover or uncover these holes to adjust the circulation of air. 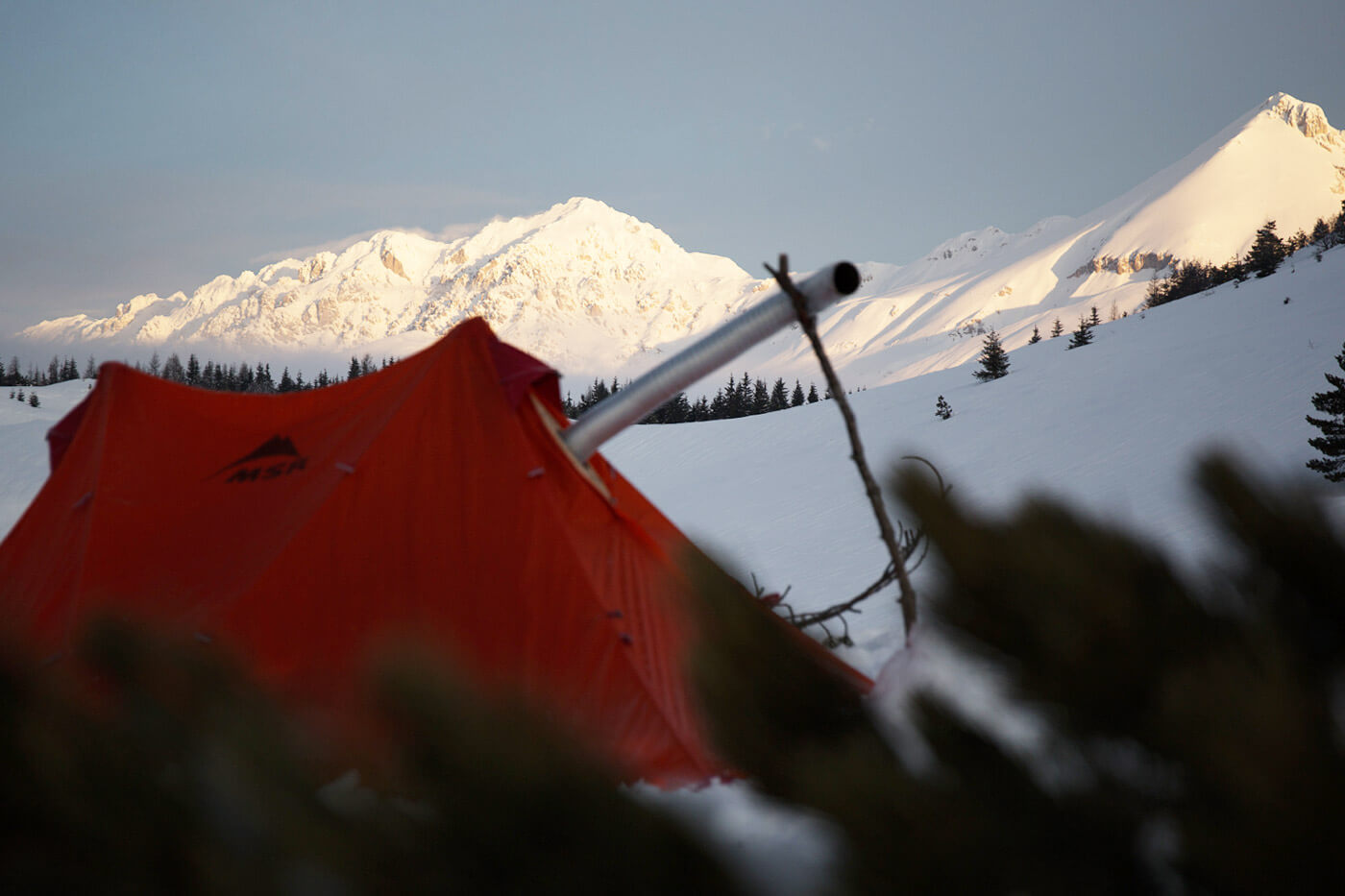 Using a threaded rod they affixed a grill to the top of the stove to cook food, dry wet wood, heat beverages, and melt snow for water. Immediately behind the grill, there is the exhaust pipe outlet which attaches to a flexible and extendable aluminium tube. This penetrates the side of the tarp through a fabricated wood elliptical eyelet. The eyelet is designed to be zipped into one of the doors which protects the fabric from the heat of the tube. Last but not least, they dug a rectangular hole between the two sleeping bags, for the stove to sit securely and to allow cold air to settle below. 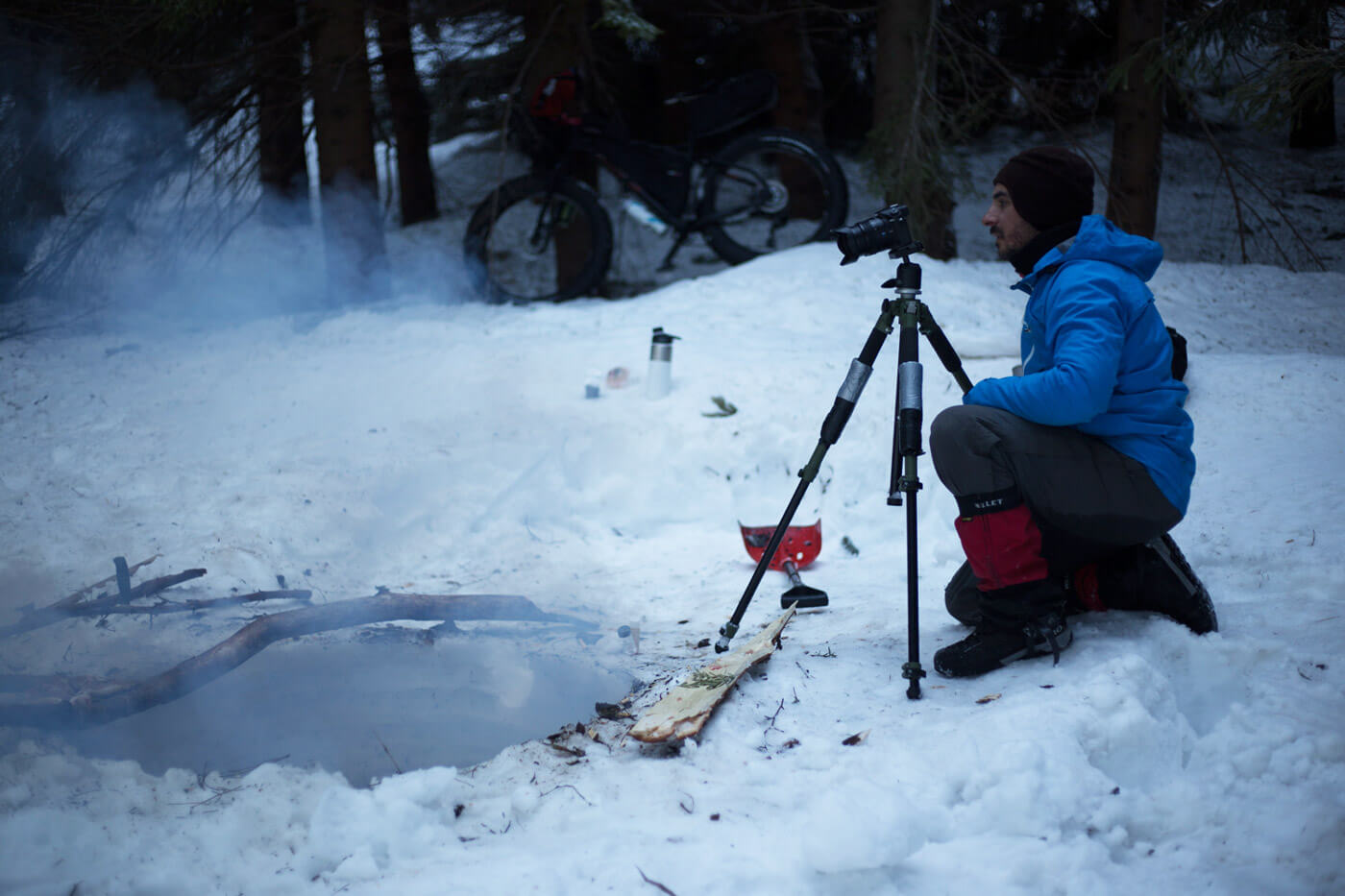 Filming themselves without the help of a crew was not easy, even less so when the weather conditions became extreme. The bitter cold and stout gusts of wind were their hands’ worst enemies as they often have to remove their gloves to properly use the equipment. In addition, the cold weather shortened battery life. To help this situation, they protected them by wrapping with insulation and storing them under the clothes to allow body heat to keep them above freezing.

The fatbikes and their equipment were only best of the best because in these extreme conditions, you have to rely one hundred percent on your material. A sore butt, numb hands, or burning feet may endanger the whole mission. That's why the guys from Montanus have been swearing on Ergon parts for years on their expeditions. 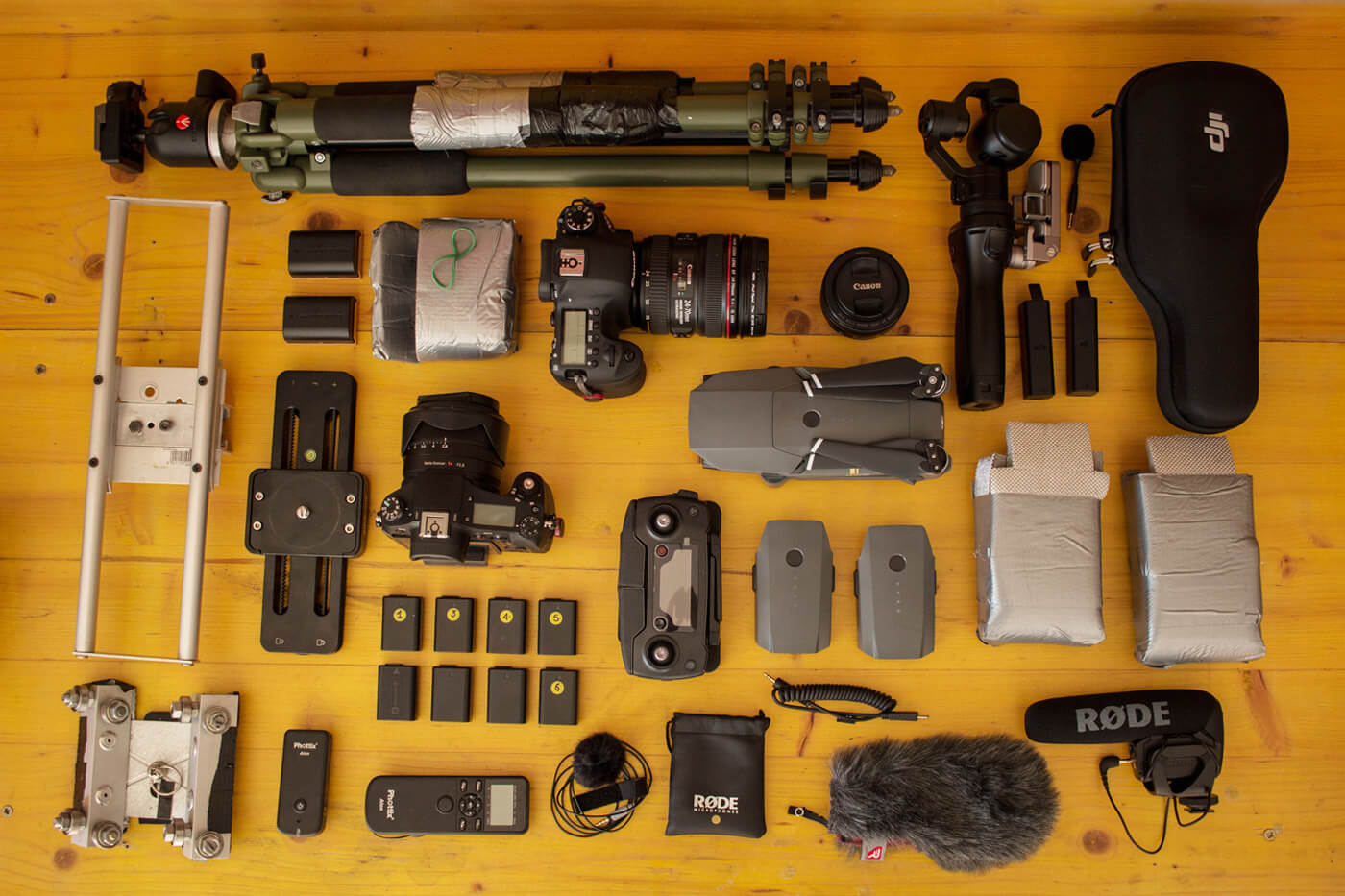 Montanus is launched by the two Italian bike adventurers Francesco and Giorgio. It is an all-seasons bikepacking project, born in Abruzzo, the Italian region where the mountain chain Gran Sasso d’Italia shows its majesty. Montanus is an attitude, an intimate journey. Montanus is the call of the wild of Buck, the dog in the novel of Jack London. Montanus is the smell of moss on your gloves, the dry red mud on your bike, the frost on your sleeping bag. Montanus is the life outside from the ‘comfort zone', it is an inspiration for those who want to experience nature. Montanus is about enjoying the slow ride, perceiving the smells and taking in the colours. 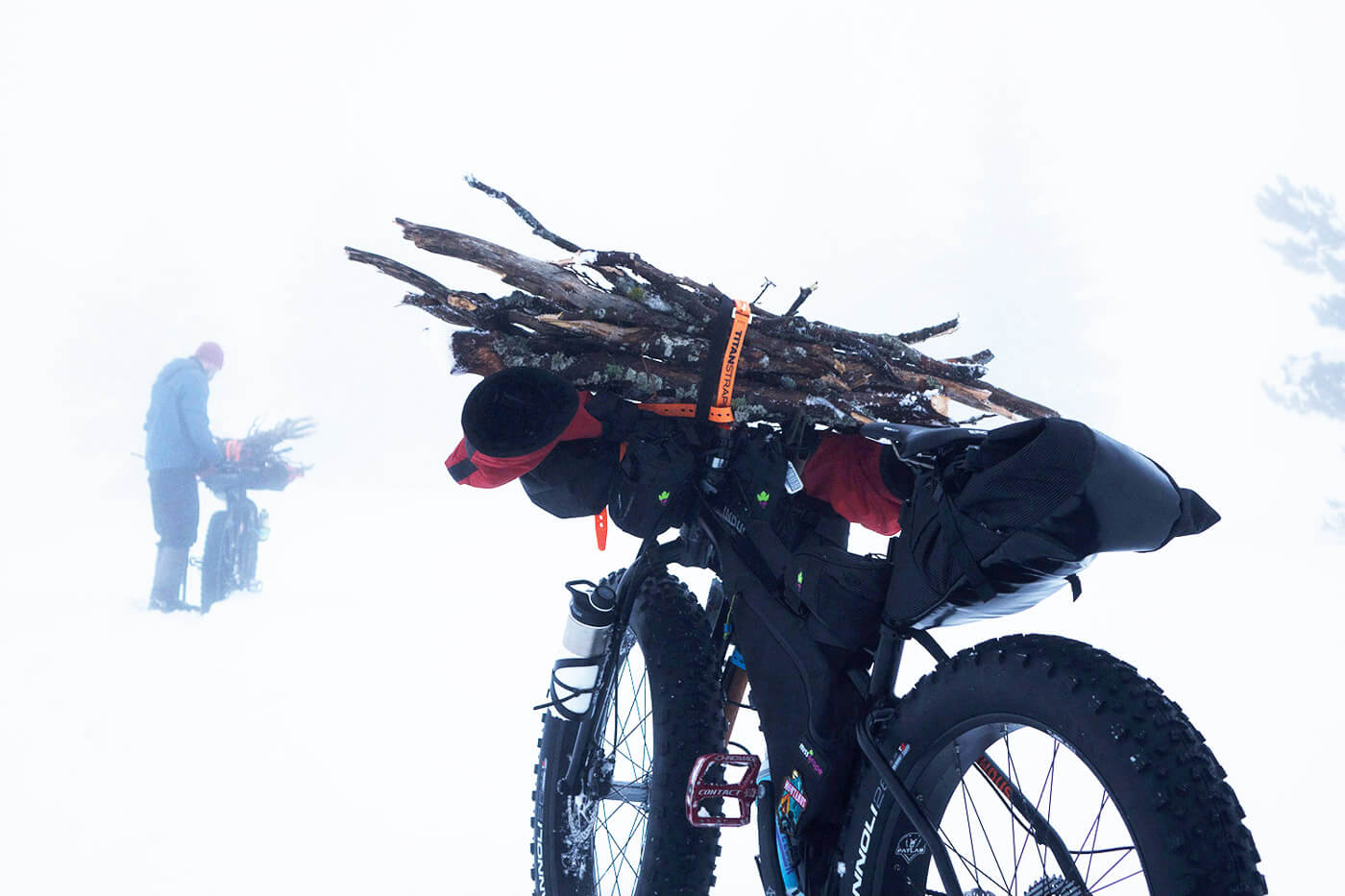